51. Back to the White House

In May 1945, the Democratic president invited the Republican ex-president to visit him at the White House.

"I would be most happy to talk over the European food situation with you," wrote Harry Truman. "Also it would be a pleasure for me to become acquainted with you." It was the start of an unlikely friendship for perhaps the oddest couple in American politics.

Early in 1946, Truman dispatched the 71-year-old Hoover to 38 nations, gathering food to avert mass starvation among victims of World War II. For three months Hoover traveled over 50,000 miles, visiting seven kings and thirty-six prime ministers. In Rome he secured Pope Pius' blessing, and amidst the rubble of Warsaw's Jewish ghetto, he honored 200,000 victims of Nazi oppression.

Back home briefly, Hoover was soon off on a second relief mission to Latin America. In 1947 he returned to Germany and Austria.

President Truman restored Hoover's name to the great dam that the Roosevelt administration had re-named Boulder Dam. In 1947 Truman asked him to reorganize the executive branch of government. All this activity probably added ten years to Hoover's life. Writing to his friend Truman in 1962, the elderly Hoover revealed, "Yours has been a friendship which has reached deeper into my life than you know." 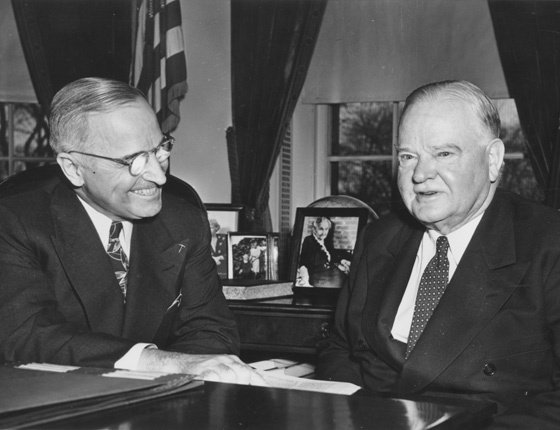