47. Life After the White House

"Democracy is not a polite employer," said Herbert Hoover in recalling his 1932 defeat. "The only way out of elective office is to get sick or die or get kicked out." Hoover departed Washington in March 1933, his once bright reputation in shambles and his career in public service apparently at an end. Yet he refused to fade away.

For the next decade, the former president defended himself against charges that he had caused the Great Depression. He wrote book after book, delivered countless speeches, and raised tens of millions of dollars for favorite causes like Stanford University and the Boys Clubs of America. In the summer of 1941, he dedicated the towering headquarters of the Hoover Institution at Stanford, destined to become one of the world’s foremost scholarly research centers.

After President Harry Truman invited him to undertake a post-World War II global relief mission, Hoover gradually regained some of the luster of his earlier reputation. Columnist Walter Lippmann spoke for many who marveled at his "rediscovery." Hoover's real self was "the bold and brilliant philanthropist who binds up wounds and avoids inflicting them." 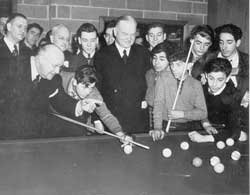