At the start of the 1932 re-election campaign, President Hoover told one audience, "Let no man tell you it could not be worse. It could be so much worse that these days now, distressing as they are, would look like veritable prosperity." This was hardly an inspiring message when compared to the Democratic candidate's appeal to the "forgotten man." Hoover tried to point out the inconsistencies in the speeches of the magical Franklin D. Roosevelt, a politician he called "a chameleon on plaid."

But everywhere Hoover traveled he faced the nation's bitterness. He was jeered outside a Detroit arena and hooted at in Oakland. Tomatoes were thrown at his train in Kansas. When comedy teams announced a rise in the stock market, the "straight man" asked if Hoover was dead.

Election Day resulted in a huge Democratic sweep, and Roosevelt carried all but six states. Hoover received the bad news at his home in California. Bruised and bewildered, an exhausted president returned to Washington for a few more months, soon to be an ex-president without influence or relevance. 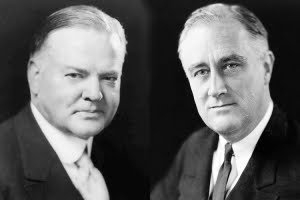