In the summer of 1932, World War I veterans assembled in Washington D.C. to lobby for early payments of their veteran's bonus (scheduled for 1945). Hoover resisted, yet as the numbers of "Bonus Army" swelled to 60,000 men, the president secretly provided them with tents, cots, army rations and medical care.

In July, the Senate rejected the early bonus by a vote of 62 to 18. Most of the veterans accepted Hoover's offer of free train passage home. Thousands remained, however, many of them non-veteran "hoodlums and Communists" who took over government buildings in downtown Washington. When D.C. police tried to remove them, a riot ensued and two protestors died from police gunfire.

Hoover called in federal troops but directed the Army to escort the protestors quietly and humanely out of Washington. Instead, Major General Douglas MacArthur sent armed troops – supported by six tanks, tear gas, and a machine-gun unit – to evict the weary veterans. The Army torched makeshift shelters and utterly destroyed their camps along the Anacostia River.

A national uproar ensued. The President was portrayed as a murderer who aspired to military dictatorship. After hearing the reports, Democratic presidential candidate Franklin D. Roosevelt told a friend, "Well, this elects me." 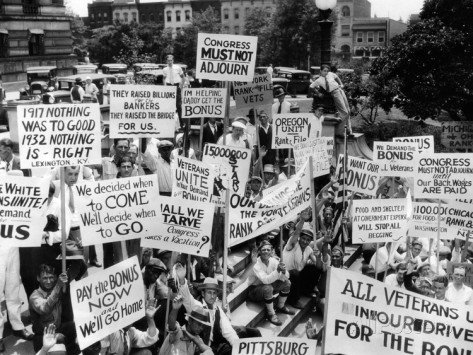