The worst economic disaster in United States history erupted in late October 1929. Stock market speculation had become frenzied as Americans yearned to "get rich quick" through stocks that were tripling or quadrupling in value. A concerned President Hoover urged the Federal Reserve and Wall Street financiers to curb stock manipulation. Regulation of the market itself, however, was considered the responsibility of the Governor of New York, Franklin D. Roosevelt.

President Hoover called conferences with business, labor, and farm leaders who promised to keep wages steady and continue with new development and construction. The president asked Congress for a $160 million tax cut plus a doubling of resources for public buildings, dams, highways and harbors. He rushed deadlines for federal contracts and urged governors to expand public works in their own states.

Praise for his presidential intervention was widespread and many, including President Hoover himself, believed that the danger had passed. "No one in his place could have done more," concluded the New York Times in the spring of 1930. But hard times were just beginning. 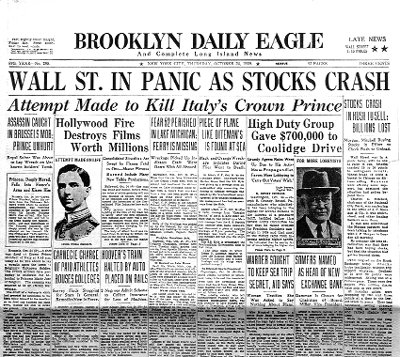